How to create a vectorial drawing with the Pencil Tool ?

21 November 2019 The designer her drawings

How to create a Pencil Tool black and white vectorial drawing ?

We outlined how essential it is to discover all the primordial points and to draw attention to the bright and dark zones so as to identify the subject’s zones of light and shade.
> This will allow you to give volume and life to your black and white line drawing.
> These final points will be really revealed in the final stage of coloring which is the object of this article « How to do a vectorial drawing using the Pencil Tool ».

1 – The vectorial drawing with the Pencil Tool

.  It is the first stage which is the most essential, the hardest and the most vital in order to do a successful drawing.
If all the culminating points which determine the volume, the correctness of the lines and the signification of the drawing have been well carried out, only then, after all this hard work, we can undertake the vectorial drawing.

.  To start, the line drawing was done on A4 paper, consequently this must be scanned
and saved in a named computer file so as not to lose it.
Next you open the vectorial drawing program.
The most well-known and popular is « Adobe Illustrator ».

The vectorial drawing with « Adobe Illustrator »

.  The Pencil Tool vectorial drawing allows you to keep and optimise all the lines and curves of your drawing and thus you can correctly conserve it in all its subtlety, it is beauty, it’s proportion and sharpness, even after enlargement.
This is completely different from a bitmap image which is pixelised and frozen in step like form.
> Thus it is absolutely vital to do a Pencil Tool vectorial drawing so as to be able to use it later whenever you want, without any disagreeable, cannot be caught up on surprises.

When the scanned drawing is opened in the software, take up the Pen Tool

Point at a first point A on a line of the drawing and follow this without rushing.

> It is important to take one’s time and direct the pen from point to point, drawing the curves as precisely as possible in following the lines of your drawing.

> You must be vigilant in not making any break before you have reached your point of depart
and have fully completed the line.
Because that would break the continuity of the line and the drawing could not be carried out. 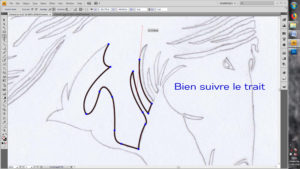 .  When you point each point of the pen on the line of the drawing, place the points neither too close nor too far apart.
It is not necessary for example to place several points on a straight line.
One at start and one at the finish is enough.

you must judge carefully where to best place the points to give you the curve you want.
You don’t need too many points.
Sometimes a point cannot be placed to curve a line because it is impossible to follow the line of the drawing.
At this moment you must remove it and try again by placing it earlier or later on the line of the basic drawing.

.  When you have finalized completely the line from A and back again to A, this is an indication that your  drawing is completely finished, if it is done in one complete loop which outlines the zones in black.

.  If your drawing requires several different loops it is imperative to work on several copies so as to clarify your work. That will also allow you to better manage the independent parts of your drawing if you want to make changes, add or suppress lines or even zones. 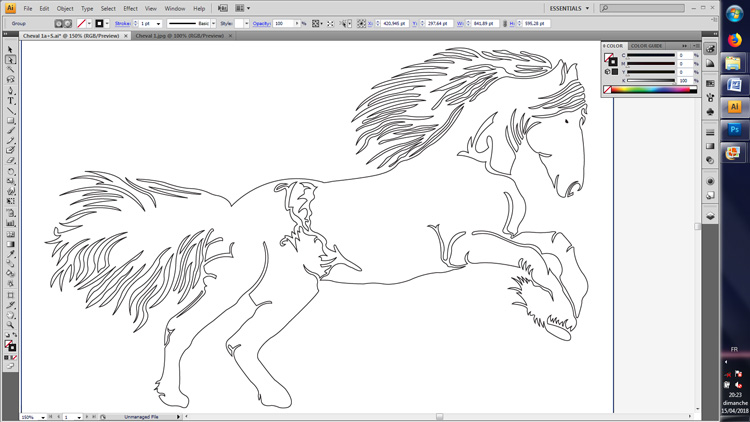 .  All the lines of your drawing are now completed correctly with precision.
So black zones can be added to give the drawing its finality.
That is to blacken all the enclosed zones. 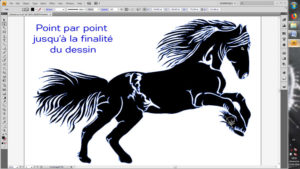 The interest of this application is to finally discover your black and white drawing and see if all the essential points previously worked on have really transmitted the visual message and kept its promises.

The drawing in black on a white base is seen as a positive drawing.

.  But it is interesting to turn it into a negative one.
Effectively black becomes white and vice versa.
A white drawing on a black background.

This work is interesting and pertinent !
> It allows you to see how the drawing metamorphoses between the positive and negative phases !
The result and the significance are transformed.
> Even the basic points of the starting out study have different values.
> In the negative form everything is displaced and transformed and the drawing gives a different message

A positive drawing’s value can increase in the negative

> And give a different message

> Or it can have important factors of expression which are displaced
> Or which lose their significance. 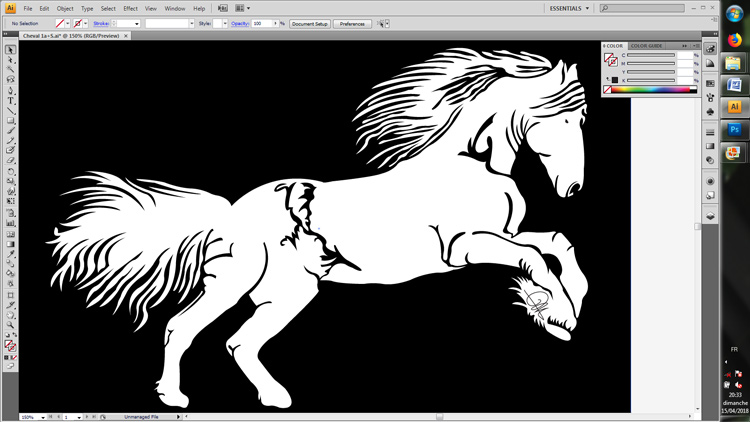 So when you carry out this positive and negative form on the same drawing :

– or you can have a drawing which expresses itself better in the negative form.

Experiment and have fun with your creations !

You are free to write to me for discussion, or to ask me questions !
With pleasure I can advise you or just simply have an exchange of experiences.

==> Drawings in Black and White : The Art of Charles Landston

==>  How to create a vector pencil in Adobe Illustrator ?

– How to create a vectorial drawing with the Pencil Tool ?  –

Leave a reply Click here to cancel the reply

This site uses Akismet to reduce spam. Learn how your comment data is processed.